Review: Homer - The Ninth Life of a Blind Wondercat

I always tell people I'm an avid reader, because picking out what book to read next is exhilarating for me. When my mom told me in 2009 to read a book called Homer's Odyssey: A Fearless Feline Tale, or How I Learned About Love and Life with a Blind Wonder Cat, I instantly said that I had already read parts of it for school and didn't like it. I thought she was talking about The Odyssey by Homer and she was not.

Well, it turned out she was talking about a book about a black cat owned by a lady named Gwen Cooper. Of course a book about a black cat meant I was instantly interested. My mom had spent a large portion of one day, lying on the couch and reading Homer's Odyssey. We often shared books, but not super frequently because I did not find myself as interested in memoirs as I do now.

I started Homer's Odyssey and could not put it down. It was not your typical cat story whatsoever, and Gwen had clearly incorporated a story about disabled cats into her book. She might not have known it at the time, but Homer was about to garner a lot of popularity and quite the following. 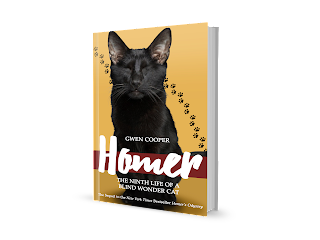 And here we are in 2015, with Gwen's latest release just hitting the book world - Homer: The Ninth Life of a Blind Wondercat. I was so eager to read the sequel to Homer's Odyssey, and I can tell you that Gwen did not disappoint. Not one drop!

Gwen's writing was so much the same in Homer as it was in Homer's Odyssey that I felt like it was just the perfect continuation. Homer is short but sweet, coming in at 115 pages. Gwen went the self-publishing route, because an industry length book would've required 20,000 more words. And Gwen got the point of her story across in her 115 pages.

Homer's Odyssey covered the first 12 years of Homer's life. Homer covers the last four years. Gwen covers her trials of sending her first Homer's Odyssey manuscript to publishers and celebrating when she finally was published in 2009. Gwen discusses her path to publication and her subsequent book tours.

It was completely evident from Gwen, that she never expected Homer's story to impact so many people. Homer was Gwen's cat, but when she wrote about him for the world to read, he became the world's cat. Everyone who read Homer's Odyssey felt like he was their cat, curled up in their lap as they read his story.

Gwen would get letters and emails of people writing to tell her that Homer inspired them to adopt a blind or disabled cats. She received hundreds of these emails and they were her favorite to get. People from all over the world would share their rescue cats' stories on Homer's Facebook page. Homer's Facebook page even helped raise money for disaster relief affecting animals!


Homer covers Homer and Gwen's rise to fame. Readers will enjoy Gwen's tales of Homer's photoshoots and filming scenarios, that sent Gwen's husband Laurence out to buy turkey to bring on the set!


Homer also allowed Gwen to write about the passing of her cats (and Homer's siblings) Vashti and Scarlett. It was clear to me that the therapeutic writing process of loss was completely there in Gwen's writing. I could feel her pain, because if you've lost a cat or someone dear, you know what that loss is like.

Readers were also introduced to Gwen's new kittens, Fanny and Clayton. Gwen told the story of how they came into their family and the adoration Clayton had for Homer. Clayton had a bad leg infection when Gwen and Laurence adopted him, and ultimately ended up having his leg amputated. But Clayton the tripod was able to run around and play with his sister Fanny, and Homer, all the same.

Since Homer had passed in August 2013, I knew that a portion of Homer would recount his loss.  Homer lived to be sixteen, remarkable for any cat, particularly for such an extraordinary one. Homer beat the odds of a rough start to life, and was so lucky to find a home in Gwen & co.


I thoroughly enjoyed Homer, just as I anticipated. Whenever I recommended (and trust me I still do) Homer's Odyssey, I always told the person that Homer had a great life with Gwen and (at the time) was still alive. I always find it difficult to read pet stories where you know in the end that the cat or dog dies. But Homer's Odyssey was not a typical pet story and never will be. Despite that Homer has since passed, his legacy lives on, particularly on his Facebook page and Gwen's website.

Gwen is a phenomenal, New York Times Best Selling Author, philanthropist, animal activist and above all, a wonderful friend. I'm so glad that she got to finish Homer's story in Homer and I cannot wait to see what comes next.

Homer: The Ninth Life of a Blind Wondercat is available now at hihomer.com.

Check out the time Gwen interviewed me as the Inaugural Homer's Hero, here.


Receiving a complementary copy of Homer did not influence my review whatsover. All my opinions are my own. Seriously, I went out and bought a copy of this book even though I already read it - it's that good :)