With cats, comes responsibility. With responsibility comes things like litterboxes. Mostly unavoidable, litterboxes can make households messy. If you’re a fastidious neat-freak (who has a lot of cats) like me, you will need durable litter and litterboxes that can remain clean without wasting litter. And I’ve found a great new litter that I’d like to tell you about.

During my entire life, we have always had cats. And I can only recall that we have changed the brand and type of litter we use rarely. I’ve known Tidy Cats clay litter most of the time – but clay is not the best litter as it kicks up quite a large amount of dust. And that dust travels everywhere in the house. Especially when you have eight cats who use the bathroom on the constant.

I’ve tried to use newspaper pellet litter, which my cats refused to acknowledge as useable litter. It sat unused for a month. Since we were seeking to move away from clay litter, we also tried walnut litter. Words cannot describe my strong dislike of the walnut litter. It barely clumped and it just made a bigger mess scooping and cleaning than when my cats used the litterbox.

Eventually we found a wheat litter, that at the time, did not produce nearly any dust. And for a few years, we were very happy with the wheat litter. But apparently, all good things must come to an end and we started disliking the litter. Now, I don’t fault the litter itself, because there were many factors that could’ve contributed to it not working. It could be that having eight cats, heavy use of the litter required way more scoopage (yes I’ve dubbed that a word) than we could adequately provide; it could’ve been that the formula of the litter changed and we weren’t aware. We ship litter to our house was having issues with their packaging –because many of the bags came expanded with air, which changed the texture of the litter. Or lastly, and probably most likely, the company that shipped and delivered the litter was somehow letting air into the bags causing the litter to expand and not absorb urine. 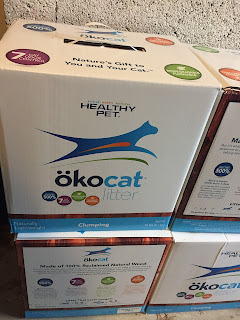 So, when I got a sample of ökocat Natural Wood Clumping Cat Litter, I was game for trying a new litter. In fact, we were so desperate at that point, after only a few uses of the litter – we decided to order a few more boxes of litter and change out a few of our litterboxes completely.

ökocat claims that their wood litter has a “proven performance as best in class, has seven-day odor control, absorbs 500% its weight, superior clumping, naturally lightweight and biodegradable.” Now, those are big claims but I feel confident stating that those claims are well met. Their litter is even flushable! Though, I have not flushed it myself and cannot vouch for the effectiveness of that. Even the boxes of the ökocat litter are environmentally friendly. The boxes are compostable and come with an easy to carry handle.

Ökocat wood litter is made from “100% sustainable and renewable wood fibers found in nature.” They typically start with “naturally fallen timber or unused lumber materials that would otherwise go to waste. The wood is then chipped and pelleted along with proprietary plant-based binders that improve the finished product.” Ökocat takes it one awesome step further and complies with the policies of the Forest Stewardship Council, Sustainable Forestry Initiative and the Forestry Preservation/Promotion Act. Ökocat is one of a kind because their “sustainable litters come from the earth, and can be returned to the earth and won’t sit in landfills for 100+ years like clay litters do.”

Ökocat’s most important component, in my opinion, is their odor control. Their litter traps the liquids and odors but does not use chemicals, scents, dyes and does so while not using any harmful materials. The wood pellet litter lasts so much longer than any other litter that we have used for our cats. It’s really quite impressive. And Ökocat litter lasts and reduces mess and waste which is a time and money saver.

Before we go, we just have one reminder about transitioning your cat to a new letter. It is best to slowly start a litter transition and not completely shift over to the new product. Here is a suggestion from Ökocat on how to switch - https://www.healthy-pet.com/okocat/Easy-Tips-for-Transitioning-To-a-New-Cat-Litter.

Posted by Rachel Shubin at 7:57 PM No comments: