On June 29, 2013 I was volunteering at Animal Outreach of Cape May County in Cape May, New Jersey with my family, when a bunch of feral kittens in traps were brought in to the center. My dad pulled back the sheet draped over the trap to see a very small, month old black kitten. He opened his mouth and let out a big hiss! Which of course, sounded like a mere whisper being that he was all of two pounds.

Flash forward to November 29, 2013 when we went to visit the kitties and people at Animal Outreach. We were delighted to find that little feral black kitty was now a beautiful six month old kitten! Now named Bobby, he had a sleek black coat with a spot of white under his chin. He was friendly and affectionate towards my dad (he clearly knew who to suck up to). My dad loves black cats, something his father passed on to him. But of course, we had five cats waiting for us at home and surely that was enough.

Well, it was enough until the black cat tchotchkes started coming home. First it was, dad buying the cats on the bottom right, trying to campaign to wear down the resistance. Then came the two cats top right from Brazil, telling us we didn't have enough black cats in the house. Then came the big guy on the left. You can't have too many honkin' black cats, can you? 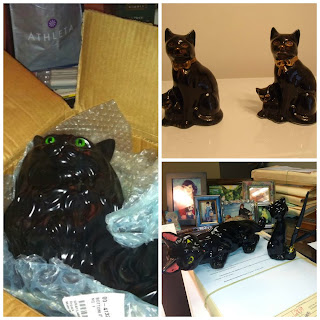 Soon my mom was coming up with all sorts of "you don't need another cat" remarks.

Mom: You have three cats with diarrhea. Do you know how much we've spent on food and the vet this month? What do you need another cat for?
Dad: So that's not "no" then?


And then we came up to Cape May for our winter vacation in December 2013. On my 20th birthday (12/30), we went to Animal Outreach to visit. And yes, there was intent to adopt Bobby. Adoption contracts were filled out, crates, carriers, food and more were brought up to NJ from home. And suddenly, Bobby was not the same cat we met.

He really just wanted to nap. Except, these people (us) kept bothering him! We wore my mom down to let us take him home to "foster" (yeah...right). He found that he could hid not only under the bed, but in the box spring. Seriously? We spent time with him, talking to him so he would get used to our voices. We gave him food and lots of treats and attention.

We came downstairs on New Years Eve morning to find that Bobby ate all the food we left for him, used his litter box and had clearly explored. Progress! We spent time with him before leaving to run errands. We came back later in the day and spent even more time with him.

And ultimately, he came out from hiding that evening. He rolled over on the scratch box that had been carefully sprinkled with cat nip. Well, he found the cat nip and started rolling around in it and he asked for belly rubs and pats. My mom had quickly gone in and out of the room before this happened and she came back in because he was crying. He wanted attention! 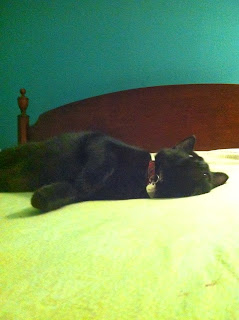 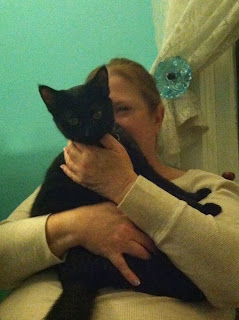 It's pretty obvious that he is not going anywhere other than with us. We officially adopted Bobby 1/1/14! He is now part of the Shubin six! I hope that he will do well meeting Piper because we want him to be her buddy. And it would be great for him to get along with Brooke, Vickie, Pearl and Henry.

Our secret weapon is certainly catnip and treats. Tomorrow, Bobby will make the voyage home with us to Virginia. All fingers crossed that it goes well.

So seeing as Bobby is a formal feral that still has feral tendencies, I thought I would create a special portion of my blog, dedicated to chronicling the progress he makes from Feral to Friendly, which my dad appropriately deemed Bobby's Bulletins.