What a whirlwind this past weekend was! From Thursday May 16 to Saturday May 18, I was in Tyson's Corner, Virginia celebrating my third BlogPaws conference. It is hard to believe that not only was this my third conference, but that it was over in a blink of an eye!

Since we live only 15-20 minutes away from Tyson's, it was a nice treat to be able to drive and not have to fly like we did last year to Utah. We picked up our swag bags from BlogPaws on the way in, but were disappointed to find that they only contained dog products.

On Thursday we drove in during the afternoon, to attend a Be the Change workshop presented by my friend Robin Olson of Covered in Cat Hair & Kitten Associates. Robin's presentation covered the devastating school shooting in Sandy Hook, Connecticut (where Robin lives), how to handle the media in that sort of situation, and the program she created to give back to her hometown of Newtown. It ended with a tribute to her Kitties for Kids mascot Fred, who recently and sadly lost his battle with FIP (Feline Infectious Peritonitis). There was not a dry eye in the room. 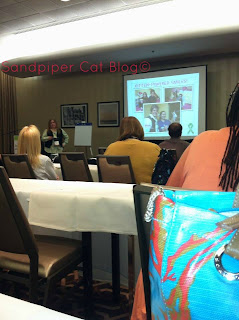 I had to take a short break from BlogPaws in the afternoon, to run to a local pet sitting job. When I came back I said hello to some friends and found a table to sit at. We had a buffet dinner and dessert while the BlogPaws committee gave their opening remarks. My mom and I stayed and chatted with good friends before heading home for the night. It was hard to get to bed because of all the excitement, so we ended up missing a bit of the morning sessions.

One of the booths at BlogPaws, the Jones Natural Chews Co booth had little chicks up for adoption! So of course being animal lovers we had to pose with them! 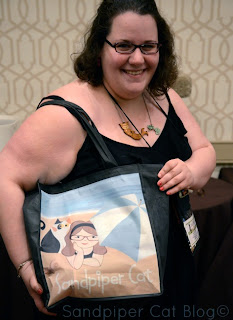 My other excitement at BlogPaws was having my Sandpiper Cat tote bag come in the mail Thurdsay night! It was exciting to show off the bag and my blog's new look to everyone there! Especially Debbie Glovatsky of Glogirly, who was the one who gave my blog its makeover.

I spent a good amount of time with my friends Renee Austin of Whimsy Cats and Bernadette Kazmarski of The Creative Cat and had lunch with them. I also met a new friend (OMG A DOG BLOGGER - can you believe it, well you better) Pascale Lemire of Dog Shaming. It was nice to have a relaxing lunch with both old and now new friends!

At this point in the day, I had only been to a little bit of a breakout session - but it just wasn't holding my interest. I made my way around the vendor booths, hoping to find some cat goodies. Luckily there were some in the Cat Lounge, but ultimately it was no where near as good as last year - sadly in part because my dear friend Kate Benjamin of Hauspanther was not able to come. All the same, it was nice to have a place to sit down. BlogPaws is a lot of socializing and networking - all while standing!

I got to spend time with Teri Thorsteinson of Curlz and Swirlz and her kitties, Coco, Brighton and Disco NoFurNo. I've known Teri pretty much my whole life - because that is how long my parents have been going to The Cat Hospital of Fairfax - where Teri works! But it is always nice to spend time with Teri outside of a work environment. I got to sit with her and her cats for a while, which was a nice break from the hussle and bussle of socializing.

Since BlogPaws didn't host a dinner Friday night, everyone seemed to have their own agendas as to where they were going to go. As for me, I hopped in my car with Renee, Bernadette and my friend Dusty Rainbolt of Adopt-a-Shelter to go down the street to the PetSmart where my dad was volunteering with our rescue. After ogling over cute kittens, we went to the restaurant affiliated with our rescue - Lost Dog Cafe. We had a nice time all chatting for a few hours before bringing everyone back to the hotel.

Saturday morning I was quite exhausted and missed the keynotes. Something I have learned from BlogPaws is that the conference is what you make out of it, so you have to be social and talk to people. Sometimes that means missing the sessions or speakers - which I hadn't really intended to do, but I had been having such a ball chatting with friends. I have been to so many of the sessions the last two conferences, that I didn't feel like I was missing out on anything much. Plus, I had run out of my allergy medication so I had to stop at the grocery store before driving into Tyson's.

Saturday morning I finished making my way around all the vendor's tables and making great new contacts (there will be lots of giveaways and reviews coming up soon!!) before lunch. At the lunch, I got to sit with my good friend Caren Gittleman of Cat Chat with Caren and Cody. We had a really nice time catching up, since Caren was not able to come to BlogPaws last year in Salt Lake City. I said goodbye to Stephanie Harwin of Catsparella, because she had a long drive home ahead of her. It's always nice to catch up with Stephanie, because we always see each other at conferences as well as online! She is closer to my age than most of the people at the conference which is also very nice. Sometimes people forget that I'm only nineteen!

The rest of the conference, I went to a session on email marketing - which I found interesting. I'm thinking about involving some sort of emailing campaign or newsletter into my blog for the future. It's not something I can see doing right now, just because I know my following is of a smaller size. At least, for now! I went to the beginning of another session, but it didn't apply to me so I ended up leaving and heading back to the cat lounge.

At the second annual Nose-to-Nose awards, a few of my friends were nominated for awards. Of course I wanted them all to win! I was so proud of Waffles Too Kitty for winning best Twitter design, Angie of Catladyland for Best Humor Blog my dear friend Joanne McGongale of The Tiniest Tiger who won best Facebook design. While all of their wins were fabulous, Joanne's win made me cry, because her cat muse Gracey (who is behind The Tiniest Tiger) passed over the rainbow bridge the night before. I know Joanne and her husband Paul miss Gracey dearly, as well as the rest of the blogging community.

My dad joined my mom and I for dinner after the awards. We headed up to Robin's room for a surprise birthday party for Ingrid King of The Conscious Cat, as it was her actual birthday! The only birthday where it was socially acceptable to play with the cats >^..^<

Overall, BlogPaws is always a nice experience. Even if the information I take away is small, the friendships and network connections are incredible and I truly appreciate them! I am very thankful to all the sponsors for their amazing opportunities! A big shout out to Pet360!

I have lots of reviews of products I picked up at BlogPaws and hopefully lots of giveaways that will accompany them soon!
Posted by Rachel Shubin at 9:53 PM