This past weekend I attended the first Alley Cat Allies Architects of Change for Cats National Conference, in Arlington, Virginia. The conference was full of cat lovers from all different backgrounds - people who care for cats and want to improve the world for cats.


The conference was well attended, with 350 people from over 38 states and two countries. I got to socialize with my blog friends Dorian of Your Daily Cute, Tamar of I Have Cat, Joanne of The Tiniest Tiger and Ingrid of The Conscious Cat. I was there not only supporting my blog but supporting my local rescue organization that I have been with since 2005, Lost Dog and Cat Rescue Foundation.

On Saturday I attended the opening session where Mike Arms, who is President of the Helen Woodward Animal Center in California. He spoke about the story of a cat named Scarlett, a former feral cat that saved her kittens from a burning building and suffered severe burns. My mom nudged me and said, "Remember that book about the cat named Scarlett you read as a child? This story he is telling is that book!"  (Here is the childhood book I read on Amazon).

Mike talked about how it is important to know that just looking at a cat and saying "I love you" won't save its life, you have to save its life by taking action. He is definitely right.

We also heard Major Steve Lamb talk about the Spartanburg Animal Services, which was very fascinating. They are an animal control team in South Carolina that has done wonderful work for feral cats.


The dinner entertainment was none other than the host of Animal Planet's Must Love Cats, John Fulton!
Check out a video here I recorded on Instagram of John singing the Must Love Cats theme song.


Overall, the Alley Cat Allies conference was a blast to attend and I hope there will be another conference in the future!

Now for the giveaway! 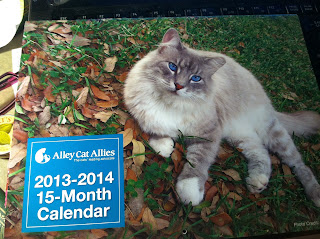 I have two extra Alley Cat Allies 2014 Calendar to giveaway and well as two "I <3 Feral Cats pins!" There will be two winners (each will win a calendar and a pin). Please enter through the Rafflecopter widget below. This giveaway is only open to US residents. The giveaway will last from November 14, 2013 to November 21, 2013 at 12 am EST.

a Rafflecopter giveaway
Posted by Rachel Shubin at 12:00 AM